Have you seen a post on your social media promising you’ll receive 6+ gifts from strangers if you take part in a “fun” gift exchange this holiday season? Beware! The “Secret Sister” gift exchange is back and it’s bad news.

What is the “Secret Sister” Gift Exchange?

The “Secret Sister” gift exchange is a post that began circulating around Christmas time since 2015, and was seen mostly on Facebook. People would receive an email or a Facebook post inviting them to be part of a gift exchange -- if they provided their name, address, and personal information, sent a small gift to a stranger on the list, and then forwarded the invitation to several of their friends. They were promised that they would receive not one but several gifts in return. 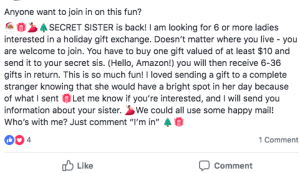 The Secret Sister gift exchange is absolutely a scam. This has been confirmed by several outlets which warn of the true nature of the exchange and strongly encourage that no one participates. Not only this, but it’s a pyramid scheme, since the scam requires recruiting other people to keep the chain going. The vast majority of participants will never receive these gifts.

You should not be giving out your personal information online in this way -- it can be used for identity theft or another scam. Additionally, since pyramid schemes are illegal in the US and considered a form of gambling, if you take part in it, you could face penalties like jail time, fines or a lawsuit for mail fraud.

What Should You Do?

You should definitely ignore the posts or emails. Do not participate in it. You can report the posts on Facebook so they are aware of the situation. Also, share this with others who might be susceptible to the scam as well, and discourage them from sharing their information.

The Secret Sister gift exchange is not the only scam or pyramid scheme of its kind, so be on the lookout for similar scams at all times! Protect yourself, your money, and your personal data.